A History of Cultural Exchange and Scientific Exploration

﻿﻿Muslims created a culture-rich Iberian Peninsula in the 8th and 9th centuries.  Al-Andalus fostered a diverse community with equality for all. With the cultural exchange, the pattern of life in Christian Spain was strongly influenced by the customs of Arabian civilization. Christianity eventually assimilated certain Islamic practices such as food taboos. Assimilation, in the other direction, took place as Muslims participated in Christian festivals and competitive sporting events. Arab food, dresses, eating manners, and language were even adopted by the Christians elites of Castile and Aragon.
"Art, literature and science prospered [in Spain] as they then prospered nowhere else in Europe."
Stanley Lane-Poole, "The Moors in Spain"
"In Spain regeneration came out not from the north, with the barbarian hordes: it came from the south, with the Arab conquerors. … It was a civilizing expedition far more than a conquest. ... With it came to us that young, robust, alert culture which made astonishingly rapid progress and triumphed so soon after its birth; that civilization which, created by the enthusiasm of the Prophet, assimilated the best of Judaism and Byzantine Science, and which also brought with it the great Hindu tradition, the relics of Persia, and many things borrowed from mysterious China."
Vicente Blasco Ibanez, Spanish writer (In the shadow of the cathedral, 1903). (courtesy to UNESCO) 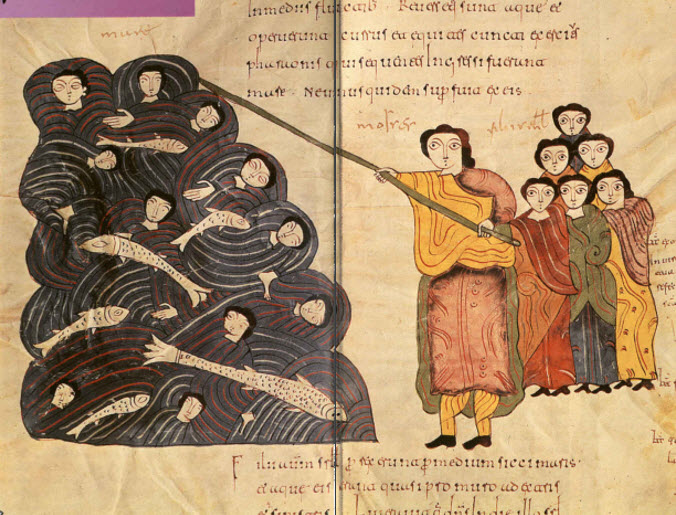 Moses bars the Egyptians from crossing the Red Sea. Miniature from a 10th-century Mozarabic Bible preserved in Leon, Spain. (Courtesy of UNESCO)